Monday 30th  – The week started out with a couple of loads out of the 182. Things picked up on  Tuesday 1st  of October. Ronald Leung and Ivan Wang got their Stage 1 done. The 182 was kept busy with Costa’s canopy handling course. Caravan got going. There were 8 loads and 10 jumpers.

Ronald and Ivan kept going on Wednesday and did AFF Stages 2, 3 & 4.  Both aircraft shared the sorties. There were 5 loads and 11 jumpers filled them.

More fun jumping skydivers arrived Thursday. Ronald powered on with Stages 5, 6 and 7. Ivan Wang did Stage 5.  Kenny Zhang and “E” Pulin Cui were next to do Stage 1 AFF.  There were 4 Caravan loads done for the day by 14 jumpers. 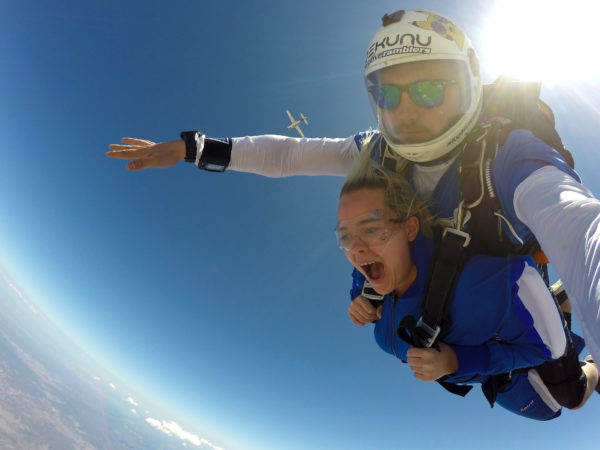 Saturday was a beauty. There were 50 jumpers here and we did 11 loads. Tandems took to the skies, Sushant Patil, Lynn Shorter and Kaitlyn Lansbury all went up. (And down a 180 km/hr!).  Shuyi Shirley Zheng did Stage 1 of her AFF Course. Kenny Zheng and Pulin Cui did Stage 2. Brad Fitzwater did Stages 2 & 3. Phillip Garlick was back for a refresher. It was a great day to kick off the long weekend. Lots of B-Rels were happening. The flatties were getting organised by Kristina, wingsuiters were around and other fun jumpers were all trying a bit of everything from solos to angles to horny gorillas!

Sunday was just as good as yesterday. We did 12 loads and 48 jumpers did them, including three more Tandems. Guy Gobourn, Joshua Ehrlich and Mark Loborec all took to the sky. Shirley Zheng continued with AFF Stages 2, 3 & 4 and Brad Fitzwater did Stages 4, 5 and 6 of his AFF Course. Again there was a lot of everything happening. And after jumping finished it was off to the pub to watch the footy Grand Final. Monday is a public holiday and the start of another Learning Curve camp. What a week.

Another awesome weekend running a basic canopy course. Was great to see some new faces on the course. By the end of the courses everyone had really improved on all aspects of flying there wing, from spotting, exits, canopy exercises, flight plans, accuracy and most importantly their landings. If you missed out on this course there will be another one before the end of the year, so stay tuned.

Macca and all the Team at Ramblers.

Was anxious-as coming in to start my AFF course, but these guys truly put me at ease. Felt more like joining a members club than just buying a commercial course. Great atmosphere - encouraging staff - awesome experience.....Now I just gotta get back and complete the course!