Monday 14th October. Another newsletter and another two people arrived to start their AFF training. Rob Flux and Adrian Allen did Stage 1 of their AFF jump after a day in the classroom. It was a great day. Luke Robertson did Stages 5 & 6. Ivan Wang did Stages 7, 8 & 9 and Ailin Shao did Stage 9 – both completing their AFF Courses, well done.  Adrianne (DeeDee) Murray did a Refresher.  There were 4 loads done from Marj the Caravan and 16 jumpers were here to do them.

Tuesday. Rob and Adrian got stuck into it and successfully completed AFF Stages 2, 3 & 4. Luke Robertson did Stages 7 & 8.  There were only 3 loads today, all pretty full with 13 jumpers here for the fun.

Wednesday. Helen Mendes was next to get started skydiving did AFF Stages 1, 2, & 3. Rob Flux breezed through Stages 5 & 6. Luke Robertson did Stage 9 – completing his AFF!  Numbers were down a little. There were 3 loads today.

On Thursday we weathered out. Friday made up for yesterday. It seemed like a weekend jump day!  Our only Tandem today was Li Huang.  Frank Henderson started Skydiving did Stage 1 of his AFF Course. Helen Mendes did Stages 4 & 5. Adrian Allen did Stages 4, 5, 6 & 7!  Rob Flux finished his AFF with Stages 7, 8 & 9 done, congratulations!  There were 7 full loads done and 25 jumpers were here doing them.

Saturday was disappointing, the weather was not good. We only managed 2 loads between rain showers. However Frank Henderson got Stage 2 done. The bar opened early. It was a nice drop of much needed rain.

On Sunday the weather was great. Emily Smith and Khadija Ahmed both did a Tandem. Clinton Howard and Pulin Cui were back and did their AFF Stage 3. Frank Henderson continued on and did AFF Stages 3. 4 & 5. Helen Mendes did Stages 6, 7  & 8 and Shuyi (Shirley) Zheng did Stages 7 & 8.  The week ended on a high. Lots of smiling happy students and about 25 fun jumpers made the most of it. Our new AFF instructors are getting some good jumps in. 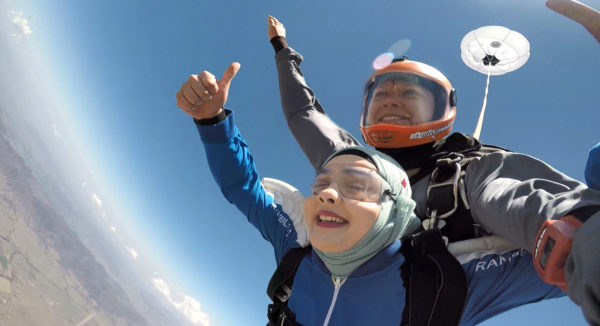 Macca and the Team of Ramblers.

These guys are a well oiled machine, what an amazing experience and such awesome people and facilities! A MUST for all!