Monday 19th –  A slowish start to the week. Student Lars Fischer was back and completed did Stage 1 of his AFF Course with Darren. Claudio and Oli filled the load.

Tuesday 20th   – A much better skydiving day, weather was beautiful. Student Lars Fischer did completed Stages 2, 3, & 4 of his AFF Course. Rachel Young was back for Stage 8 and a few solo jumps. Tom worked on his B-Rel Stage 2 and 3. The resident fun jumpers filled the plane. 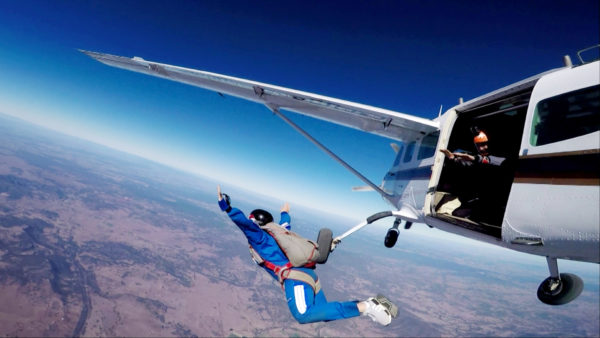 Wednesday 21st   – The westerly winds were back, we tried starting early to beat them…… unfortunately mother nature won and only 1 load took to the skies before we were blown out. Students Lars Fischer and Luke Bullivant took this opportunity to learn how to pack their own parachutes, well done boys.

Thursday 22nd  – Gail force winds were now at the Dropzone. No one jumped today, even the birds stayed on the ground today.

Friday 23rd    –  Today the winds were ok for a few loads to take to the skies. The Tandem for today was Hamish Holden – congrats.  Student Marcus Piercy spent the day in the classroom with resident instructor Adrian and he completed Stage 1 of his AFF Course that afternoon.  Ellen and Geoff completed B-Rel jump Stage 5 with coach Shelby. Well done! A few new faces were seen on the Dropzone today.

Saturday 24th – Tandems today were Ezekiel and Zarah Knight, Jaime Jones-Way, Liam and James Bleakley, Dean O’Neill, and Joanne Chambers – Check out their Freefall faces below – Congrats too all.   Students Marcus Piercy and Tom Carruthers were back at it again completing Stages 2 and 3 Rachel Young completed Stage 9 – completing her AFF Yee-Ha.  Aaron Wood completed his B-Rel Stage 6 with coach Oli. Tom sawyer worked towards his B-Rel 6 with new coach Robin. The local jumpers filled the plane with Hop ‘n’ Pops, freeflying and wingsuiting.

Sunday 25th – Beautiful jumping weather today ‘where were you’? The Tandem for today was Alan Blackwood – Congrats.  Students Marcus Piercy and Lars Fischer powering through Stages 4, 5 and 6 of their AFF Courses.

Hamish – An awesome experience.  Thank you for a great birthday surprise.

Jo – Brilliant, thanks so much!

Dean – That was absolutely amazing.  I can’t stop saying WOW!

Alan – Amazing jump, Adrian was cool and knew what he was about.