We get this question every day at Ramblers, and we’d like to take the time to address it once and for all. “Do skydivers have a backup parachute,” our customers ask us, “In case the first one doesn’t open?” The answer is an unmitigated, one-hundred-percent YES.

Every skydiver at Ramblers, from the newest tandem student to the most experienced athlete in our sky, makes every jump with two parachutes — a main parachute and a backup (called the “reserve parachute” in proper terminology). Here’s what you need to know about your two new best friends… 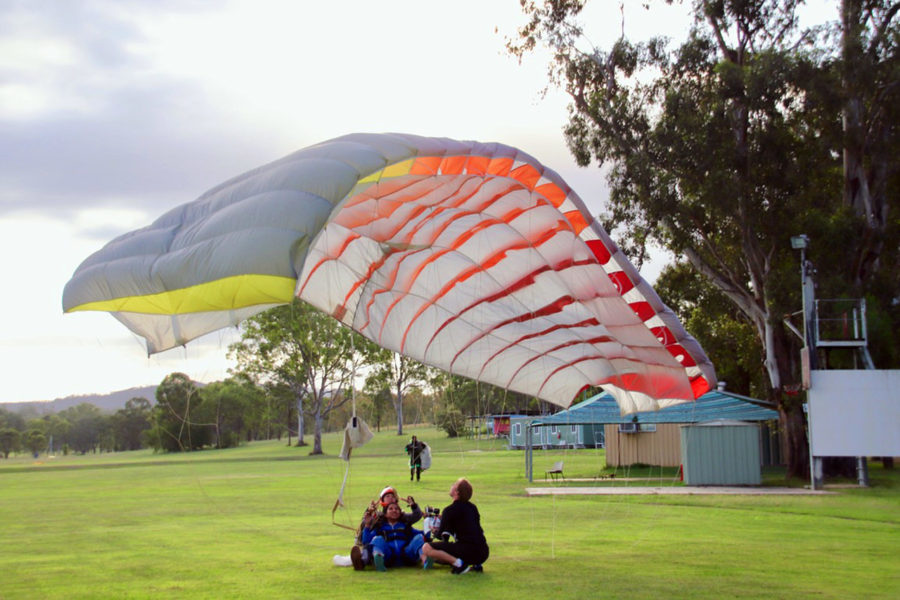 Why Are There Two Parachutes Instead of One?

Because — even though the main parachute works virtually all the time — there are risks in skydiving, and it’s our business to mitigate those risks as far out of existence as we can.

Modern main skydiving parachutes (which we refer to as “canopies”) have a lot in common with sports cars. (Tandem skydiving main parachutes are much more like Volvos than Ferraris, to continue the analogy, but the overall rule still applies.) Main parachutes are beautiful, colorful little marvels of aerodynamic technology. They float like butterflies and sting like bees, and they’re a wonder to behold. They’re almost perfect, in our eyes. Of course, nothing in this world is perfect. Usually about once every thousand jumps or so (depending on a few variables, almost all of which are simple statistical happenstance), parachutes malfunction.

When a parachute goes wrong, the last thing the skydiver underneath it wants is to be at the wheel of another Ferrari. They want a reliable sedan of the sky, with one job and one job only: to get them down for the safest, softest possible landing. They get rid of the misbehaving main and deploy the reserve parachute.

An Automatic Parachute? No Way/Yes Way

A reserve parachute is special. It can only be packed by a nationally certified rigger. It has to be taken out and inspected and repacked every 180 days, whether or not it has been used in the meantime. It’s designed to open quickly, to resist any kind of malfunction and fly down to the ground in as boring a manner as possible. It’s meant to be so reliable that it’s designed to do just that even if the skydiver flying it is unconscious. Wild, right?!

Tandem skydiving parachute equipment (and most equipment used for sport skydiving) is equipped with an Automatic Activation Device (“AAD,” for short). The AAD is a tiny, very precisely calibrated computer that calculates the skydiver’s rate of descent and altitude. Its job is to deploy the skydiver’s reserve canopy at a pre-set altitude if s/he hasn’t done so already. If the skydiver didn’t notice the altitude, has been injured somehow in freefall so they can’t pull, or has had their lights knocked out, it’s all good: a parachute is comin’ out anyway.

Good to know: The kind of AAD used during a tandem skydive has been specifically designed to activate at a higher activation altitude. That means additional safety for the tandem passenger and instructor.

Who Packs the Parachutes?

Technology, as we all know, only goes so far. Just like the tech that supports race car drivers, alpinists, and other high-octane athletes, it’s the skills behind the tech that make the world go ‘round. It follows that skydivers are extraordinarily well-trained to pack parachutes in a way that absolutely minimizes the chance of a malfunction. Tandem parachute packers not only have a ton of experience — they’ve also received intensive additional training and plenty of structured mentorship.

It takes two to make a dream come true.

This is the place for your AFF Skydive Course! It was one of the most memorable experiences of my life and in no small part due to the great people at the Toogoolawah dropzone. I highly recommend this place for those considering learning how to throw themselves out of a perfectly good airplane. You won't regret your decision.