A booming market has facilitated a sprawling showroom of variations, but the basic design tenets remain the same: a human-shaped suit, with two wings connecting the arms and torso and one wing connecting the legs. Inflated by relative wind, the suit forms an airfoil. That airfoil shape provides sufficient lift to carry a skilled pilot far across the sky (or away from a cliff, or – in some cases – closely over terrain).

Wingsuits work using principles similar to those of every other human-made airfoil, from fighter planes to paragliders. A wingsuit is, at its heart, an airfoil built around a person–so, just like planes and paragliders, the pilot needs to learn how to fly it. It is not as easy as it might look to control one of these babies. Here are a few key questions, answered:

1. What are the basic requirements to wingsuit?

The Australian Parachute Federation mandates that skydivers have a minimum of 500 freefall skydives, or a minimum of 200 freefall skydives made within the past 18 months, and receive one-on-one instruction from an experienced and qualified wingsuit trainer (who possesses an authority and/or recognized instructor status from a wingsuit manufacturer).

Aside from those basic guidelines, wingsuit manufacturers offer more specific instructional ratings for their products. It’s important to note that all skydivers, regardless of experience in other disciplines, have to seek thorough training in flying wingsuits, even if they have thousands of jumps doing other kinds of things. It’s serious stuff!

A wingsuit behaves like any other airfoil: It creates a combination of the aerodynamic forces of lift and drag. The balance between the two is referred to as the wingsuit’s “glide ratio.” It indicates the aerodynamic efficiency of the wingsuit pilot, and it’s expressed as a number that shows the total meters of forward distance flown for every meter of altitude lost. For example, a wingsuit that goes two and a half meters forward for every meter it falls has a glide ratio of 2.5:1.

A skydive is usually performed from around 12,000 feet over the landing area, and wingsuiters often deploy their main parachutes 9,000 feet (3 kilometers) below that altitude. At that respectable glide ratio of 2.5:1, a wingsuit pilot can cover about 7.5 kilometers (4.66 miles) of distance. That number doesn’t remain constant. It not only changes with the shape and volume of the wingsuit pilot in his or her gear but also with the weather conditions (such as headwinds, crosswinds, and tailwinds) and the pilot’s airspeed.

So: If you’re not watching where you’re going, you can end up very far from the dropzone. Very, very far.

An airfoil requires airspeed to even work. Airspeed generates lift. Without lift, you’re not going anywhere.

In fact, the speed at which the airfoil moves through the air has everything to do with how efficiently it can fly. No plane can take off if it’s not moving, right? The same is true, of course, for wingsuits, and the skilled variation of airspeed is key to success in the discipline. A skilled wingsuit pilot is able to fly throughout the range of airspeeds available to him/her with his/her body and equipment. The minimum airspeed required to generate sufficient lift to fly is called stall speed, below which the wingsuiter will no longer, by definition, be flying. 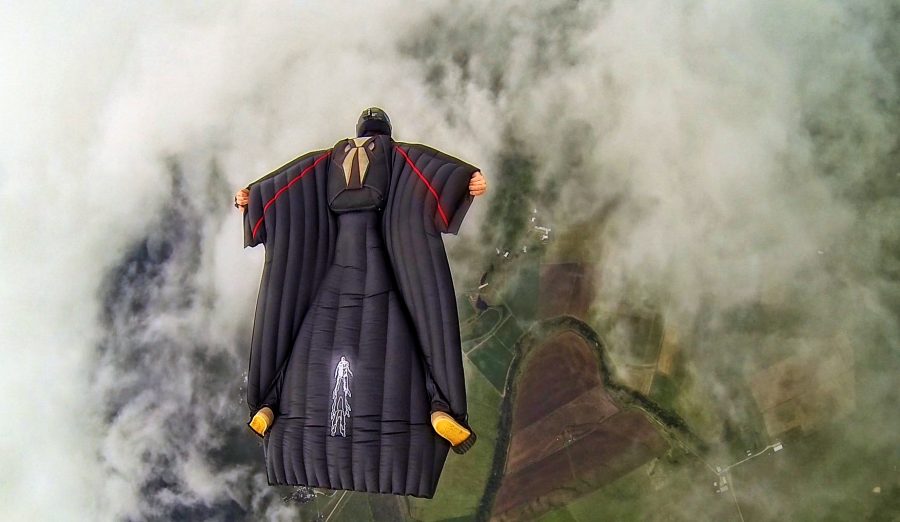 The wingsuit pilot’s personal relationship with glide ratio tends to revolve around two key numbers: “maximum glide” and “minimum sink.” The former reflects the airspeed at which the wingsuiter flies the greatest distance forward for each meter of lost altitude. (This number usually hovers around 30-40% greater than the wingsuiter’s stall speed.) “Minimum sink” is, as the term implies, the airspeed at which the wingsuiter loses the least amount of altitude, though he/she will not fly as efficiently as they do at their max glide. Flying at minimum sink delivers longer freefall time, but the pilot covers significantly less distance.

So, without further ado: A typical wingsuit’s forward speed-not accounting, of course, for the forest of variables that can affect it-hangs out at around 100 miles per hour.

Such a good experience, they made it feel like coffee with an old friend!